Is It Possible for a Believing Latter-day Saint to Be a Republican? Part 16

The Debt Ceiling and Balancing the Budget

Since the Republicans took control of the House of Representatives, they have issued incoherent threats about holding the economy (and by extension the world financial system) hostage over the debt ceiling. Now, let’s be clear about the debt ceiling and the hypocrisy involved in these threats.

The debt ceiling is not the time to be negotiating over budgetary items. It is a normally perfunctory measure that Republicans have nevertheless found a way to weaponize. The time to negotiate over spending is when the budget is passed into law. That has already happened this fiscal year, so raising the debt ceiling should be nothing more than an official approval of new borrowing for items the legislature has already agreed to spend money on.

The hypocrisy, of course, is that the Republican House had no qualms about raising the debt ceiling during Trump’s term in office. Indeed, it was raised three times without incident. When Trump entered office, the national debt stood at $19.9 trillion. When he left office, it was just over $26.9 trillion. For you math types out there, that’s a 35 percent increase. A good portion of that debt was due to the COVID-19 pandemic, but much of it was also due to a totally unnecessary and unfunded tax cut that benefited mainly the wealthy (I’ve mentioned before that I’m firmly in the middle class, but the Trump tax cut increased my taxes slightly) and due to an increase in government spending that for some reason didn’t bother Republicans at all. But now that a Democrat is in the White House, the debt is suddenly a crisis. Go figure.

But let’s talk about the budget. Fiscally conservative Republicans in the House say they have secured a commitment from Speaker Kevin McCarthy to create a balanced budget over the next decade. But Republicans are notoriously bad at math. Or perhaps they understand the math but know that in order to retain political power, they have to take positions that are mathematically impossible. First and foremost, Republicans are genetically opposed to raising taxes. They think tax cuts are the solution to every economic problem so they will, under no circumstances, vote for a tax increase. Second, they are also opposed to cutting defense spending. Third, they claim (perhaps not truthfully) that they will not cut Social Security or Medicare, which would be political suicide. So, if these measures are nonnegotiable, what are the Republicans going to cut in order to balance the budget?

Well, let’s look at the budget. In 2022, the U.S. spent about $5.8 trillion, with about $4.8 trillion funded by government revenues (primarily taxes). This leaves a $1 trillion deficit. Of the $5.8 trillion, 13% went to defense, 21% to Social Security, 25% to health insurance (Medicare, Medicaid, CHIP, and the ACA), 11% to economic security programs (the Earned Income Tax Credit, Child Tax Credit, Supplemental Security Income for the elderly or disabled, and SNAP), 7% to benefits for veterans and federal retirees, and 7% to interest on the debt. There’s not a whole lot here that Republicans would dare target for cuts, which leaves a whopping 16% of the budget for the GOP to take their axes to. And that 16 percent includes education, transportation, agriculture, and law enforcement. Good luck finding $1 trillion of waste there. 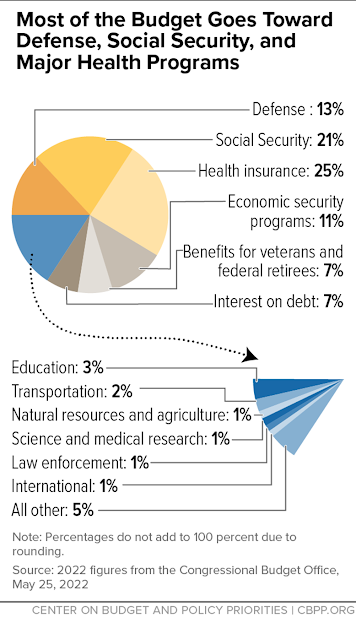 When you look at the numbers, it is easy to see why Republicans refuse to offer any specifics on what they would cut. The areas that could be trimmed would be politically unpopular Consider, for instance, that a full quarter of the electorate that either is Republican or leans Republican is 65 or older and another 31 percent are between 50 and 64. How do you suppose this 56 percent of the electorate would react if the GOP admitted it wants to cut their Social Security or Medicare benefits? That would probably go over like a lead balloon.

It may surprise you to find out that 10,000 Americans turn 65 every day. Yes, that’s not a misprint. Many of these people have earned less than enough to save anything for retirement, so they are quite dependent on their Social Security checks. My generation, the Baby Boomers, are retiring in droves, and until that blip in the population picture passes, it will be very difficult to cut Social Security or Medicare.

It's also difficult to cut benefits for the poor, the disabled, the veterans, and many others who depend on the federal government to keep them fed and housed and relatively healthy. You can see why Republican legislators, when asked for specifics on what they would cut, try to change the subject or place the burden on President Biden. But it isn’t Biden or the Democrats who are threatening the freeze the debt ceiling and sabotage the financial system. It’s the Republicans who are issuing vague demands that we cut spending. But what spending cuts? They won’t say because they can’t say. They have no plan.

Now, I’m of the opinion that we should get the budget under control. But I’m a realist. I’m not a political extortionist or arsonist, which is what Republican lawmakers are trying very hard to be. So, here’s my plan.

First, we have to acknowledge that we can’t balance the budget by just cutting spending. Ain’t. Gonna. Work. Therefore, we need to restore sensible tax rates, which went out the window with Ronald Reagan. We should restore a top marginal tax rate of at least 70 percent (remember, it was at least 90 percent for years after World War II). We should also increase the corporate tax rate. We should tax capital gains, which go primarily to the wealthy, at regular income tax rates. We have coddled the wealthy for far too long, and they have amassed a staggering amount of wealth. Wealth inequality in America is, frankly, un-American and unsustainable. We should also consider a VAT, value added tax, which most other wealthy nations assess. And yes, we should increase funding to the IRS so that they can go after tax cheats. If you really want to know where the Republican Party’s loyalties lie, just look at the feeble excuses and lies they have concocted to oppose (and try to reverse) the increased funding to the IRS that the Democrats passed into law.

Second, we should reform Social Security. Right now, for obvious reasons (appeasing the wealthy), there is a cap on income that can be taxed for Social Security. It is $160,200 for 2023. The fund is set to run out of money in the next 10 to 15 years. One way to restore its solvency is to make all income taxable. Yes, all income. Remove the cap. We should increase payroll taxes slightly. We should also do some means testing. People who have saved plenty for retirement should not be receiving Social Security benefits. Medicare should likewise be means tested. Those who have benefited from low taxes and stockpiled money and assets should be expected to pay a similar premium for Medicare to what working people pay for health insurance.

Third, we should take a hard look at our defense spending. The U.S. military owns nearly 27 million acres of land in 45 countries and eight U.S. territories. This land is worth $749 billion and costs billions to maintain. The Department of Defense is the largest employer in the world, with over 2.87 million employees. The U.S. spends more on its military than the next ten countries combined. Can we really afford this? Yes, we need to present a strong image to keep our enemies from taking advantage of us or of other free countries, but how much do we really need to spend? How much land do we really need? How many employees and active service people do we need to realistically defend ourselves and others? How many weapons systems do we really need? How much should other countries be contributing to world peace? These are hard questions that have not been asked.

So, one more reason why you should not be voting for Republicans. In the game of chicken we’re about to see over the debt limit, remember that this is a totally meaningless and artificial limit that most other countries do fine without, thank you. So don’t be fooled by the rhetoric. When politics places the credit-worthiness of the United States in jeopardy, the party responsible is, well, irresponsible and reckless. Stop giving these arsonists more matches.