Some Thoughts from New York City

That is the door Donald Trump and other Republicans would slam shut. Is there anything more un-American than this? 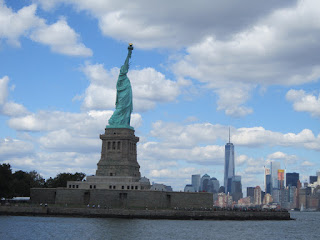 Posted by Roger Terry at 9:03 PM No comments:


I’ve been thinking recently about the modern Mormon usage of the term faith-promoting, and in my ruminating I’ve been reminded of one of my favorite essays that BYU Studies has ever published. It is a 2007 essay by Travis Anderson that appeared in our special issue on Mormon cinema. Anderson begins his essay, “Seeking after the Good in Art, Drama, Film, and Literature,” with the following story:
Not long ago, kids in tow, I burst in unannounced on my parents and found them absorbed in some ubiquitous TV sitcom. While we peeled off our coats and the kids started chasing each other around the house, I jokingly chided my mom for wasting her time on such mindless drivel. In reply, she playfully denounced my elitist taste and defended her show as “good, wholesome entertainment.” Well, it may indeed have been entertaining. And being a show that originally aired back in the early eighties and even then was aimed at an older demographic, it was rela­tively free of the profanity, sexuality, vulgarity, and similar material that almost routinely taints current TV programming. What caught my atten­tion, however, was my mom’s use of the word “wholesome,” which seemed oddly inappropriate with reference to such a program. Innocuous, maybe. But wholesome?
Anderson’s point in this essay is that wholesome, meaning “without objectionable content,” is probably the wrong goal for us when seeking benefit from art. He continues:
Rather obviously—as my mother would readily admit—movies, books, films, music, drama, dance, and other forms of art and entertain­ment that are without objectionable content are not in consequence of that fact spiritually or intellectually nourishing. And if something is free from objectionable content but is not nourishing, then it is the mental equivalent of diet soda—no unwanted calories, perhaps, but nothing very good for you either. All of this begs the question, then, how and why has the lack of objectionable content, in and of itself, become such a prevalent standard of goodness? Whatever the answer to that question, I believe that the con­sequences are bound to be far-reaching and potentially dangerous when decisions concerning the films and dramas we see, the visual artworks we contemplate, the music we listen to, and the literature we read are guided exclusively, or even primarily, by a negative standard. Why? Because judg­ments made primarily with reference to a lack of objectionable content implicitly require an eye focused precisely on that objectionable content, rather than on the good as such.
One unfortunate consequence of such a negative focus is an attitude characterized not merely by an inclination to throw out the baby with the bathwater but by a reluctance or incapacity to see the baby at all.
So, how does this apply to our frequent goal of seeking out media or experiences that are faith-promoting? Well, I believe that faith-promoting has come to occupy a similar position in Mormon culture as wholesome. Although it appears to be a very positive ideal, it is, in reality, a negative standard. If we are so concerned about the potential of knowledge or experience to be anything less than faith-promoting, we shun it without even considering whether that knowledge or experience might have other redeeming values that outweigh its inability to promote faith.
Let me blunt about this. There are many books, stories, blog posts, essays, films, firesides, and even scholarly articles that achieve their goal of promoting faith at the expense of either the truth or a nuanced view of a complex world. Reality is quite a messy affair. The Church itself is a complicated and not always faith-promoting enterprise. If we simply seek to promote faith in all places and at all costs, we may be setting ourselves and others up for an eventual fall. By focusing solely on faith-promoting material, we intentionally avoid material that might cause us to ask important but uncomfortable questions in our quest for truth; and not asking these questions would, of course, prevent us from finding truth.
I would suggest that perhaps a better goal than seeking that which is faith-promoting might be to pursue that which is truth-promoting. Seeking truth will not always be pleasant. In fact, sometimes it is depressing. It is certainly not always faith-promoting, in the common Mormon use of the term. But if we can’t handle truth, how are we to ever become like Jesus, who described himself as “the way, the truth, and the life” (John 14:6)?
Seeking that which is truth-promoting is the equivalent of watching Schindler’s List, an important and unreservedly redeeming R-rated movie with some objectionable content, rather than restricting our viewing to innocuous films like The Home Teachers or Church Ball. Sometimes we want to protect others (and ourselves) from anything that might cause them (or us) to lose faith. But if our faith is grounded in inaccurate perceptions of the Church, its history, its leaders, or its doctrines, then can we really call it faith at all? The scriptures define faith as a “hope for things which are not seen, which are true” (Alma 32:21, emphasis added).